Devotional Absurdity and the Efficacy of Failure

Devotional Absurdity and the Efficacy of Failure in Bangladeshi Shrine Performance 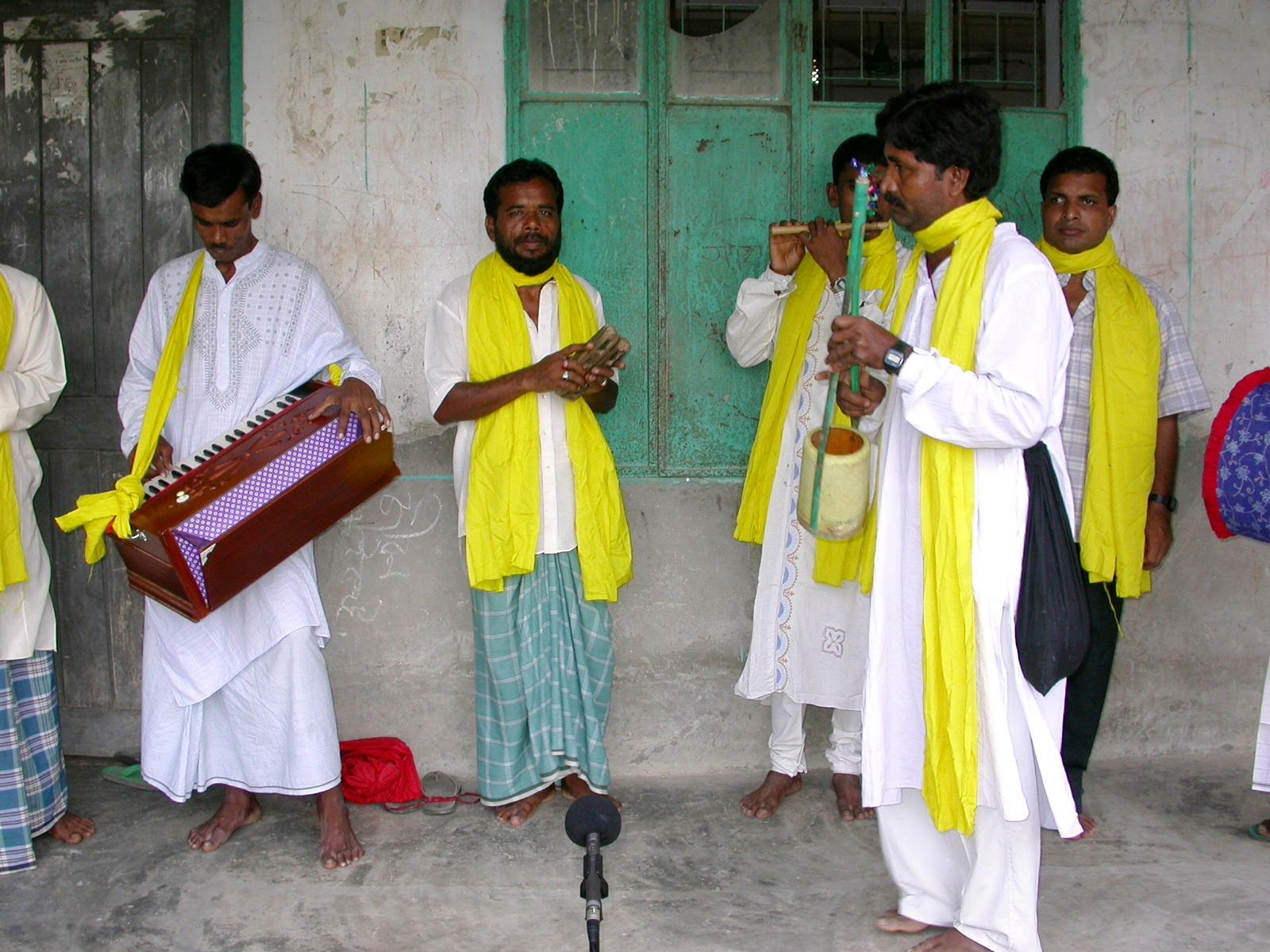 At certain shrines in Bangladesh, the performance of absurdism is neither a perfunctory nor frivolous act, but reverberates at a poignant intersection between failure and religious meaning. Absurdism is typically informed by some sort of calamity, a disappointment stemming from the human desire to find meaning in life and the ultimate futility in achieving such a thing. However, in Bangladesh, a devotional absurdism need not feel so nihilistic and, especially in musical performance, it can represent a meaningful recognition of the difficulty in experiencing something that is contradictory or disconcerting. Ultimately, its open-endedness is also inviting, and its subjective approach to absolutes and universals can even inspire camaraderie.

In contemporary Bangladesh, a community of boyati artists and shrine venues converge through the genre of bichar gan—a highly stylized, rhetorical, and dialectical performance between two Sufi bards in an impromptu setting—ruminating on a variety of religious (and sometimes non-religious) topics. Overall, this shrine venue is an aggregative musical reflection of Bengali Muslim piety through the ages, sounding various impressions along a continuum that represent gradations of “Muslim-ness.” Through this shrine-based musicking, boyati artists creatively navigate their way across a mélange of poetic ideas and musical forms to articulate broader cultural musings on disunion and alterity. The discursiveness of bichar gan not only suggests a religiosity in flux, but alludes to a history of foreign bureaucracies, non-Muslim cultural hegemonies, and the remembrance of Liberation-era trauma in Bengal.

In the dialectical shrine performance, a boyati musician may be contracted to represent any side of a particular debate topic—some of the traditional themes include: light vs. form, angels vs. mankind, Hindu vs. Muslim, and prophethood vs. sainthood. Sometimes, as a test of musicality and scholarship, the two boyati artists on stage “switch sides” after the intermission, and in order to demonstrate discursive prowess. This distinctive aspect of the performance indicates that hope and despair are not opposites in a rhetorical battle of wits. Furthermore, the pastiche of this musical style, and the endless play that citation affords, interposes the mixed, absurd, or ironical strains of debate performance with the casual and ambulatory interactions of pilgrimage, further drawing attention to the subtle insights into devotionalism that quotidian sociality can yield.

What are the advantages of integrating musical motifs, devotional genres, and saint-composers into a performance that indulges in the absurd? In Bangladesh, these modalities can profoundly demonstrate the ways in which conceptual and theological discussions are crafted through human experience. Given that such compositions are usually based on a series of predicaments, a song’s lyrics can, for example, provide a broader sense of how religious conviction is questioned in the face of catastrophe. Alternatively, in terms of ambience, it may productively allow for a religious confrontation to unfold through the unassuming spirit of joviality, thereby creating empathy for the plight of the singer-composer. Lastly, as devotional spectacle, the performance of such songs may draw from surprising or unorthodox sources in musical arrangement, whereby the “absurdity” is somewhat subliminally structured around an inter-religious concoction of acoustic components.

Overall, absurdity in shrine performance is an experience-centered phenomenon, and sheds important light on the nature of orality and aurality, or the manner in which a bricolage of devotionalism is made audible, imbued with meaning, and sonically received. With a nod to historical and theological implications, it mostly approaches failure sensorily and situationally, moving beyond an “acknowledgement of failure” in order to ruminate on a present “significance of failure.” In the topical atmosphere of bichar gan, its unapologetic conglomeration of scholarly and popular knowledge is extempore and fickle, focusing our understanding of devotion in the moment. Furthermore, aesthetes of absurdism commonly mediate religiosities, socioeconomic incentives, and a broader musical imaginary of their own, which are aroused by the devotional unfolding. While the playful tête-à-tête through song feels phantasmagorical, uncertain, and ostensibly opposed, its evocation of failure is ultimately a reexamination of subjectivities endowed with the here-and-now.

As a series of autonomous networks, the Bangladeshi shrine cultures themselves that house this devotional absurdism accentuate the incongruous and sometimes volatile interactions of varying religiosities through the spiritual objectives of pedigreed brotherhoods, cultural appropriations of Islamic heritage by the Bangladeshi state, or popular opinions on the value of musical piety. Concurrently, such shrines also encourage and conflate the boundaries of traditional sacred space via an experiential and symbiotic devotional music market that accompanies the experience of pilgrimage. Together, these elements celebrate failure through the unbounded possibilities of inter-discursivity, making the vast array of shrines throughout the nation remarkable sites of a pointillistic piety that complicates the purity or stability of a precise devotional truth. As such, shrine performances end not with a definitive conclusion, but celebrate insolubility through issues contentious or obscure.

Bertie Kibreah is visiting assistant professor in the Department of Folklore and Ethnomusicology. His interests in contemporary shrine performance in Bangladesh are particularly informed by discourses of voice, acoustemology, itinerant listening, trauma and memory, intergenerationalism, immigrant-migrant relations, and experiential ethnography. He is also musical advisor and tabla instructor for the Kalapriya Center for Indian Performing Arts, and formerly directed the South Asian Music Ensemble at the University of Chicago.