A Cat in the Basket and Other Scholarly Stories

A Cat in the Basket and Other Scholarly Stories 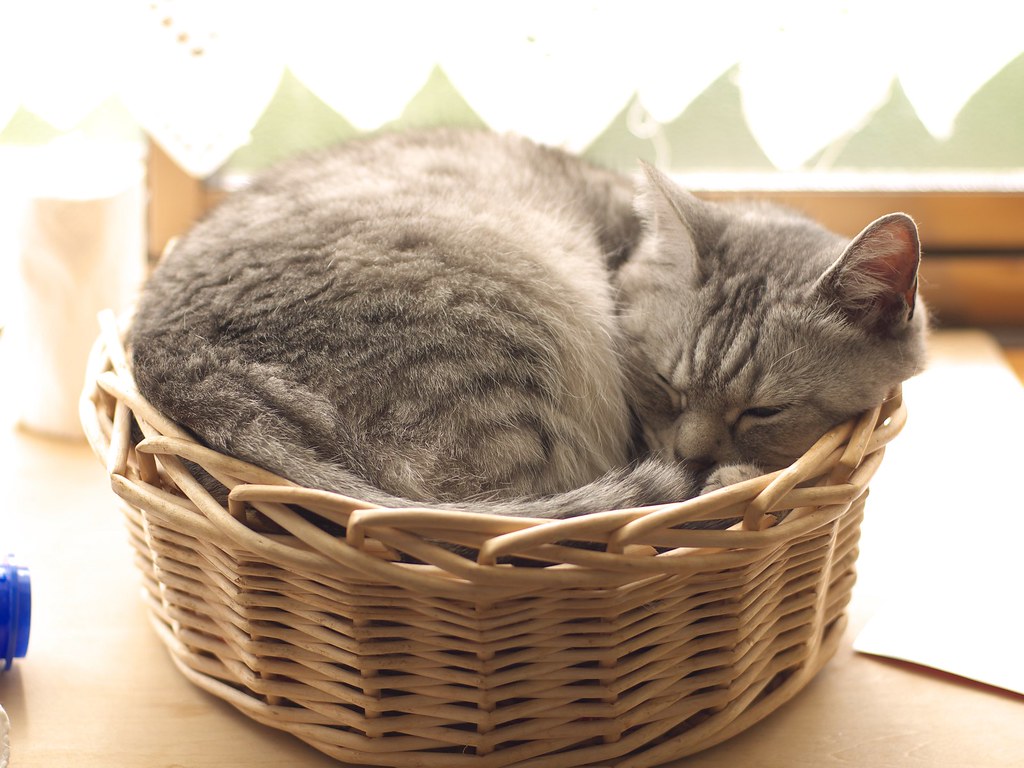 "A cat in the basket" by elminium is licensed under CC BY 2.0

In his journal, published as Fragrant Palm Leaves: Journals 1962-1966 (trans. Mobi Warren), the Vietnamese Buddhist monk Thich Nhat Hanh wrote about an experience he had while teaching at Columbia University in the 1960s:

I was browsing on the eleventh floor of Butler Library. I knew the library was about to close, and I saw a book that concerned the area of my research. I slid it off the shelf and held it in my two hands. It was large and heavy. I read that it had been published in 1892, and it was donated to the Columbia Library the same year. On the back cover was a slip of paper that recorded the names of borrowers and the dates they took it out of the library. The first time it had been borrowed was in 1915, the second time was in 1932. I would be the third. Can you imagine? I was only the third borrower, on October 1, 1962. For seventy years, only two other people had stood in the same spot I now stood, pulled the book from the shelf, and decided to check it out. I was overcome with the wish to meet those two people. I don’t know why, but I wanted to hug them. But they had vanished, and I, too, will soon disappear. Two points on the same straight line will never meet. I was able to encounter two people in space, but not in time. (75, Berkeley: Parallax Press. 2nd Ed.)

For Thich Nhat Hanh, this was an experience of emptiness, of the absence of a permanent self. But when I read this passage in college, I thought the opposite. The size and weight of the book, the precise spot in the library, and the encounter with two people “in space, but not in time” reinforced for me the materiality of the written word and the embodiedness of scholarly life. Many times since, I have had the same experience, holding an object that had seldom been held before, reaching out for an invisible embrace. In the British Library, it was a manuscript of Indian philosophy studied in 1921 by Stefan Stasiak, the Polish Indologist who would escape Nazi persecution after supporting protests by Jewish students against their segregation in Lviv. In the Harvard University Archives, it was a diary entry in 1937 by Charles Rockwell Lanman, the first Wales Professor of Sanskrit, indicating how very, very lonely he was towards the end. In the Schlesinger Library of the Radcliffe Institute, it was a questionnaire completed in 1908 by Edith Stearns Cushing, an ace Sanskrit student who outshone her male classmates but had to continue reading by herself. Each annotation, each underline, each line left blank, was the trace of a life both outside the text and preserved in its pages.

We often talk about the life of the mind as if it were the mind that mattered, when it’s really the life. Scholarly life is my primary research interest. What goes into a person’s thinking? What draws them to a text, or a work of art, or a concept? Where do they sit to write? What did they eat, smell, and see that day? Whose hands did they touch? Whom did they hear crying in the streets? If I can understand who they were, their personalities, surroundings, and ethical comportments, I can learn something about my own scholarly life.

Because I study religious intellectuals, most of the time I read their thoughts on scripture. This is called reception history: understanding how interpretations of classic texts shape their meaning. However, my interest is not in readings, but in readers. In my first book, Love in the Time of Scholarship, I study the reception of a Hindu scripture, the Bhāgavata Purāṇa, between the fourteenth and eighteenth centuries, in order to understand how religious commitments affect scholarly writing. These scholars were members of an educated elite. They worked in a language, Sanskrit, and in a genre, scholastic commentary, that was notoriously abstracted from the concerns of everyday life. Contrary to how they often presented themselves, however, they were responsive to popular currents of thought and practice. Their writing shows that vernacular ways of being and believing could push through the glass ceiling of Sanskrit intellectuality. Religious commitments, and the particular social worlds that nourished them, prompted some scholars to shift the terms of the otherwise neutral intellectual disciplines in which they worked.

More than tracking these new ways of thinking, I am interested in scholarly ways of being, or habitus. That brings me to the social and cultural history of intellectual life. In comparison with scholarly cultures outside premodern South Asia, there is little documentary evidence to support arguments about the context of intellectual production. Letters, diaries, biographies, and portraits are all in short supply. However, there are ways to understand the social, or at least the personal, in and around the text. When it is difficult to determine the social and historical context in which people wrote, we should take recourse to what I call subtextual reading. If contextual reading means that context is indispensable to understanding content, subtextual reading allows content to reveal context. For example, premodern copyists of the corpus of classical Tamil poems appended a kiḷavi, a miniature scene-setter, that provided basic information about the speaker, listener, and occasion of the poem’s utterance. These were guesses, at best, a form of transmitting knowledge that required the reader to accept their premise; in other words, a joke.

Indians did this all the time, telling funny stories about authors based on offhand comments in their writing. The ancient grammarian Patanjali, it is said, hated his students. In his Great Commentary, he says that in the Vedic recitation, if a pupil utters a vowel with different accents, the instructor slaps him on the face for the mispronunciation. Elsewhere he says that according to some, the meaning of the Sanskrit word for “word” (śabda) is “sound,” for it is used that way in everyday expressions like “Speak up” (śabdaṃ kuru), “Shut up” (mā śabdaṃ kārṣīḥ), and “That kid sure is loud” (śabdakārī ayaṃ māṇavakaḥ). At some point, Sanskrit students in Kerala decided to run with this. According to a local legend, Patanjali was teaching a class when a student got up to use the bathroom. Furious at the distraction, his eyes flew open and burned the whole class to a crisp. As Patanjali began to regret his rash action, the offending student returned. Horrified at the sight, the student collected himself and consoled his teacher, saying, “Don’t worry sir, I remember the whole lesson.” “This is all your fault!” cried Patanjali, and burned him up too.

I have known my share of Patanjalis. For many people in my field, the form of scholarly prose should be utterly serious, unequivocal, scriptural. But I find it difficult to “take seriously,” even and especially as a virtue. What if the practice of reading a text were to take it as a joke? After all, the definition of a joke I gave above - a form of transmitting knowledge that requires the reader to accept the premise - could apply just as easily to scripture. Perhaps our relationship to any canon, religious or academic, would be healthier if we did not take it seriously. Humor is amoral, and as such unreliable. But it could be gentle, soft, silly, and forgiving. In looking for the everyday life of scholarship, for the feelings that inspire reasoning, what I really care about is a vision of scholarly life that moves from mastery, control, and rectitude, to vulnerability, sensitivity, and compassion.

When it comes to teaching religion in public, sometimes good humor is better than good faith. For instance, religious studies as a social science has developed all kinds of ways of thinking about ritual theory. But when students ask me about this or that practice, I refer them to my dad’s theory of “the cat in the basket.” He used to fulfill priestly functions for the local Hindu community on a small-scale but public level. Usually he provided symbolic interpretations of ritual steps that could satisfy a modernist audience. But on occasion, with mischief in his heart, he would refer to the cat in the basket. Before a household ceremony, the story goes, family members were running around to find a cat to place under a basket. “We can’t start without the cat!” urged the patriarch, while the priest waited, bemused. What did the cat have to do with anything, he ventured. “You see,” said the patriarch knowingly, “this is an ancestral practice. For generations we have not embarked on any initiative without the cat under the basket.” The priest realized that one of his own ancestors was probably responsible: once upon a time a cat had snuck into the ceremonial space and the priest back then had thrown a basket over it to prevent interference. Eventually it was incorporated into the ritual. And that’s how traditions are formed, my dad would conclude, satisfied and full of mirth. The point of the story was not that all traditions are absurd, or that ritual efficacy is purely performative. The point was that meaning is social and historical, and we do not need to appeal to antiquity or to eternal insights to justify our acts. The fact of us being here together in worship is enough. It may not be enough forever, and another generation will shuffle things up. But we have found our cat, and they will find theirs.

Scholarly habits form in similar ways. Spend enough time being broken down by your teachers and you will think that criticism is a form of love. But bring your whole being into the life of learning and your values change. This is what I’ve learned from students who agitate for a more just and democratic educational space. When marginalized groups critique the conditions of exclusion through which the university exists, they raise the ethical question of whose lives matter, whose minds matter, and whose pasts and futures matter in the academic caste system. Sensitivity to their demands includes the explicit recognition that one’s everyday life and personal experiences always already filter into the space of education, and that instead of being a threat to scholarly objectivity, they open up creative possibilities within traditions of learning themselves. My research and teaching hold out for this possibility. If we can discern multiple voices in the learned practices of premodern scholars, we may learn to listen to those in our own halls.

Anand Venkatkrishnan is Assistant Professor at the University of Chicago Divinity School. He specializes in Hinduism, Sanskrit literature, and the history of South Asian Studies. His book in progress, Love in the Time of Scholarship, explores how religious commitments affect scholarly writing in early modern India. His second project, Left-Hand Practice, concerns a group of religious intellectuals involved with the political left in modern India.