The Center for Religion & the Human at Indiana University Bloomington presented the Iris Book Award to The Songs of Trees: Stories from Nature's Great Connectors (Viking, 2017) by David George Haskell. Books considered for the award are nominated annually by scholars working in areas of science, nature, religion, and technology and by academic and popular presses. For more information on the Iris Book Award and its nomination process, visit our website

The ceremony was followed by a reading from The Songs of Trees, and a discussion with prize-winner David George Haskell, in conversation with Professor of Religious Studies (University of Groningen) Kocku von Stuckrad, and ecologist and philosopher David Abram. The event was moderated by Lisa Sideris, Professor of Religious Studies and Associate Director of the Center for Religion & the Human (Indiana University). 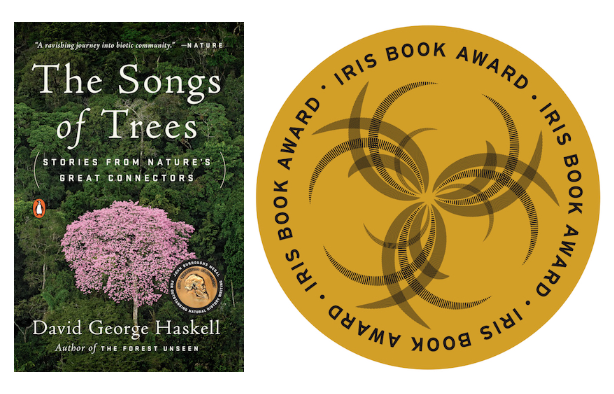 For those not acquainted with Haskell's work, "Eleven Ways of Smelling a Tree" provides an excellent introduction. The essay is accompanied by original music and art, and draws together some of the same themes as The Songs of Trees: awakening the richness and diversity of sensory experience, the blurred boundaries of "individuality" among humans and trees, and the ecology of ethics and the sacred. An excerpt from The Songs of Trees is also available online.

David George Haskell is the recipient of the first annual Iris Book Award for The Songs of Trees: Stories from Nature’s Great Connectors (Viking, 2017), which also received a John Burroughs Medal for Distinguished Nature Writing and was chosen as a Best Science Books of 2017 by NPR’s Science Friday. His other works include The Forest Unseen, a finalist for the 2013 Pulitzer Prize in nonfiction. He is Professor of Biology at Sewanee: University of the South.

Kocku von Stuckrad has published extensively on topics related to the cultural history of religion, science, and philosophy in Europe and North America. Together with Whitney A. Bauman, he is co-founder and co-director of Counterpoint: Navigating Knowledge, a research center and information hub, located at the interface of academic and non-academic knowledge practices and traditions. He is Professor of Religious Studies at University of Groningen, the Netherlands.

David Abram is a cultural ecologist, geophilosopher, performance artist, and independent scholar who lectures widely. He is the founder and creative director of the Alliance for Wild Ethics, and author of Becoming Animal: An Earthly Cosmology (Pantheon, 2010) and The Spell of the Sensuous: Perception and Language in a More-than-Human World (Vintage, 1997).

This event is presented by the Center for Religion & the Human and co-sponsored by Counterpoint. Funding is provided by the Henry Luce Foundation and the Office of the Vice Provost for Research at Indiana University Bloomington.